LESSONS IN CX: A TRIP TO SOUTH EAST ASIA – PART 3 – HONG KONG. WILL WE SEE OUR SUITCASES AGAIN? 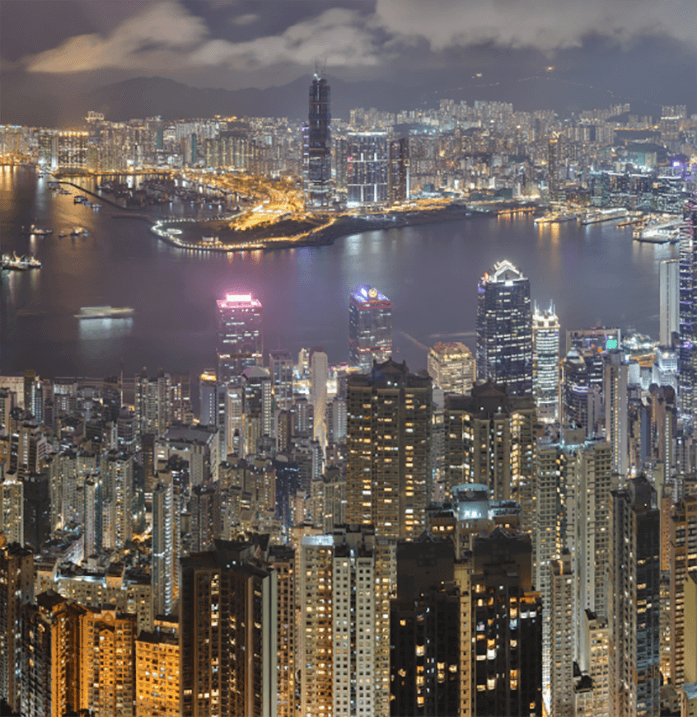 Lessons in CX: A trip to South East Asia – Part 3 – Hong Kong. Will we see our suitcases again?


If Singapore is a city seemingly built from the ground up to be as effortless as possible to inhabit and Kuala Lumpur is a city that exudes more of an unkempt charm, Hong Kong would exist on a scale somewhere between the two.

Hong Kong was our third and final stop on a two-week tour of South East Asia. A tour that aimed to share our observations about global Customer Experience trends and discuss how organisations in the region are affected by changing customer needs across a diverse market. And we were lucky enough to be hosted by leading national and international businesses in every country, each a household name.

As it had been in Singapore and Kuala Lumpur, we couldn’t help trying to interpret the experience our destination provided both residents and visitors and how this potentially shaped the customer challenges of companies we were visiting.

“Actually, I do fancy dim sum”. Navigating around the city


Arriving on a weekend and with the luxury of a day to explore, we headed out of the hotel for a quick walking tour of central Hong Kong. Having proved itself invaluable in Singapore, in our hand once again – and ready to guide us around the city – was a free ‘Handy’ mobile device provided by the hotel.

In fact, the Handy was developed in Hong Kong by travel start up Tink Labs primarily as a way to solve the traveller’s problem of getting mobile connectivity while abroad. The device has evolved since then and one now sits in over 700,000 hotel rooms worldwide, each device allowing hotels – and Tink Labs – to better understand the needs and wants of visitors. The device now seamlessly integrates with hotel services. One chain, Westin, has gone as far as to remove in-room guest guides, phones and room controls, using the powerful device to provide all three for guests.

Outside of the hotel, the device’s search function allows the company to learn more about the experiences users are seeking in each city and tailor content (written by an in-house team) and offers to this. 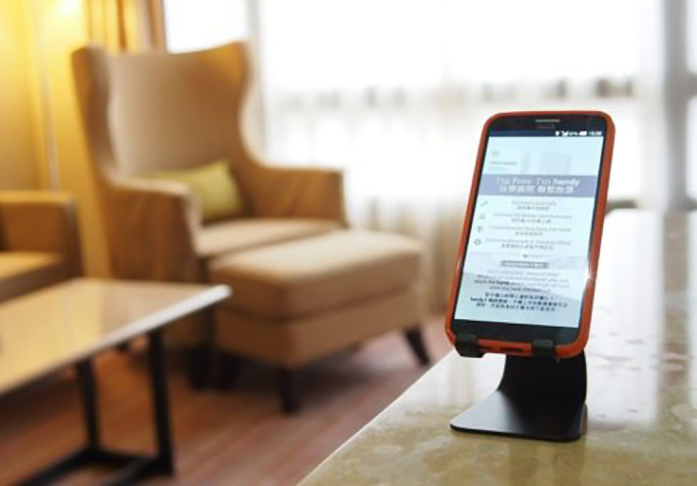 For example, the Handy knew it was nearing lunch time, and knew we’d probably want to try dim sum (apparently, when the Handy team started tracking their new search function five years ago it prompted them to add more suggestions about where to eat the city’s most famous snack food). Rather than face the daunting prospect of finding the best dim sum in a city of Hong Kong’s size, we asked Handy to navigate us to a nearby restaurant. It was offering us 15% off our meal after all.

Going up (and down again). Keeping Hong Kong moving


After our meal we asked our Handy to recommend a bar in the city’s SoHo district, unaware that this would mean boarding Hong Kong’s famous 800-metre-long Central – Mid-Levels escalators, the city’s innovative (when conceived in 1982) way to reduce traffic congestion and help residents commute up and down Hong Kong’s unique topography.The escalators didn’t reduce traffic congestion, but they did come to serve the city’s residents. New businesses opened up alongside the escalators (with rents rocketing as a result) and each level quickly developed its own unique character.

What had been conceived as a way to reduce road traffic has now became a crucial artery of the city, carrying upwards of 85,000 passengers a day, including shoppers and bar hoppers like us. 25 years later the famous escalators are still solving the accessibility challenge Hong Kong’s landscape creates. 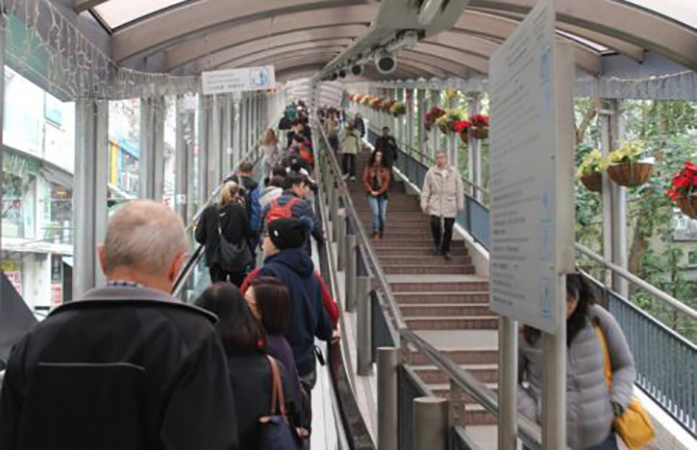 Once we’d embarked we couldn’t help but ride the entire length of the world’s longest outdoor escalator (or 20 individual escalators to be precise) all 135 metres to the very top. And it wasn’t the prospect of the view from the top that kept us on board, but the unique insight each level gave us into a vibrant and multi-cultural city.

The Art of Mixology. A flawless customer experience


We ended the evening in The Old Man – an intimate, yet lively, cocktail bar located down an unassuming alley not far from SoHo.

From the moment we walked in it was clear the venue had been deliberately set up to create modest theatre out of the art of mixology. The counter, shaped unusually, like a capital letter ‘I’ forces patrons to sit communally to watch the Mixologist at work at the head of the counter. Behind him, for an added bit of wonder – and to encourage customers to order the one drink that stirs it into action, is what can only be described as a shiny, futuristic cocktail chemistry set.

Overseeing the proceedings is a giant portrait of the author the bar is named after, Ernest Hemmingway – fittingly, a man serious about his cocktails.

It’s easy to see why The Old Man recently made the list of the world’s 50 best bars. The whole experience is delivered with unpretentious, effortless finesse. And the appreciation of witnessing the craft that goes into your tipple makes you appreciate it that little bit more.


Hong Kong’s subway system, the Mass Transit Railway (MTR) is regarded as the world’s most efficient transport system, running to schedule 99.9% of the time according to the operator.In a bid to tackle traffic congestion issues, not only has the government created a transport system that effortlessly moves a population around their city with minimal fuss, to make sure it’s accessible to all prices have been kept low. A single journey ticket costs a quarter of a ticket on The London Underground.

As we stood on the platform waiting for our train, handy arrows on the floor subtly enforced passenger alighting/boarding behaviour to discourage the ill-mannered free-for-all that can often occur on underground systems elsewhere in the world (London Underground, take note). Once on-board our train, Electronic maps reassured us, as MTR virgins, that we were travelling in the right direction. Confident we’d be unlucky to find ourselves in the 0.01% of commuters we also knew we’d arrive at our meeting promptly.

When will I see you again? In town check-in


A day (and four meetings) later we found ourselves back on the MTR heading to its Airport Express station.

Hong Kong has eliminated the need for visitors leaving the city to haul their luggage to the airport – the physically demanding feat of lugging a case through turnstiles, up and down stairs and on and off trains.

We wheeled our cases up to the ‘In Town Check-In’ desks and handed our passports over. Three minutes later we each left the desk 15 kilograms lighter and with flight boarding passes in hand.

The check-in clerk had done well to reassure three astonished (and somewhat cynical) Brits that they’d not only see their luggage again, but they’d see it eighteen hours later at Heathrow Airport. 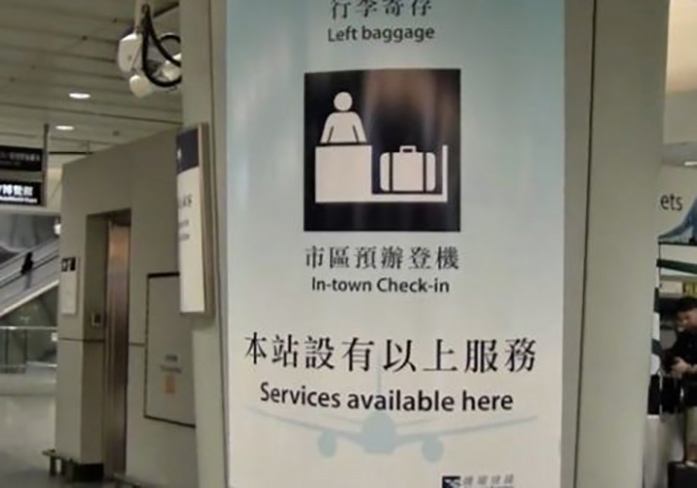 With several hours until our flight, in town check-in acted as an invitation from Hong Kong to spend those final care free and luggage free hours exploring the city. And of course, we were already in an MTR station ready to transport us wherever we wanted to go.

The innovative idea, mutually beneficial to visitor and the city, had made our last memory of Hong Kong a pleasurable one. That pleasure continued as we breezed, luggage-less, into the airport and straight through security.

And our luggage did greet us back in the UK. It was never in doubt.

The three cities we visited on our short, but insightful trip – Singapore, Kuala Lumpur and Hong Kong – all offered their own unique experiences. Whilst Singapore leads the way in the use of data and technology in its continual strive to create an effortless, frictionless city to inhabit, all three cities taught us very different lessons in how to deliver a memorable customer experience – whether carefully planned, or a moment of serendipity.

Note: This article is written by Eliot Sykes, Head of Customer Experience at Ethology, a sister company of Splash. Eliot and his team were on a 2 week visit of Asia, introducing the Ethology offering to Clients of ours.

Thank you for reaching out!

We take every query seriously. We’ll be sure to respond as quickly

(and with as much thought) as possible.