Lessons in CX: A trip to South East Asia - Part 2 – Not taking a stroll around Kuala Lumpur. 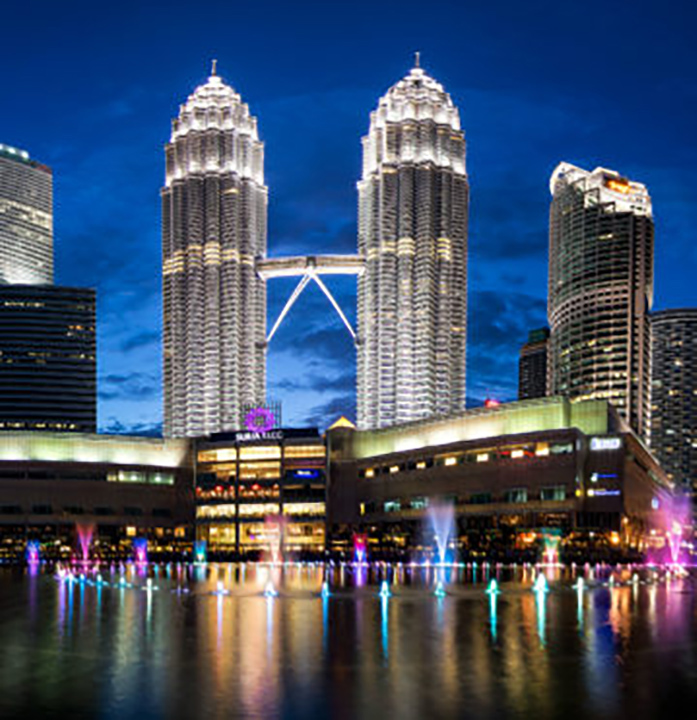 Lessons in CX: A trip to South East Asia - Part 2 – Not taking a stroll around Kuala Lumpur.


If Singapore is a city seemingly built from the ground up to be as effortless as possible to both inhabit and visit, Kuala Lumpur is a very different experience.

The Malaysian capital was our second stop on a two-week tour of South East Asia. A tour that aimed to share our observations about global Customer Experience trends and discuss how organisations in the region are affected by changing customer needs across a diverse market. And we were lucky enough to be hosted by leading national and international businesses in every country, each a household name.

As it had been in Singapore, it felt important to interpret our experience of the city and how this potentially shaped the companies we were visiting, many of them originating in Malaysia and head-quartered in Kuala Lumpur.

An airport in the forest. A microcosm of Malaysian culture


We arrived at Kuala Lumpur International Airport (KLIA) on a weekday evening. The bustle of this enormous transport hub – the international gateway to Malaysia – was noticeable compared to the more serene Singapore Changi airport we’d departed just an hour earlier.

KLIA is an impressive feat of construction. Like Changi, it was constructed to be environmentally friendly, built to the concept of “an airport in the forest and a forest in the airport”, representing the tropical splendour of Kuala Lumpur’s natural resources. And it certainly fulfils the brief, surrounding travellers with a pleasant, green environment as they pass through its terminals. 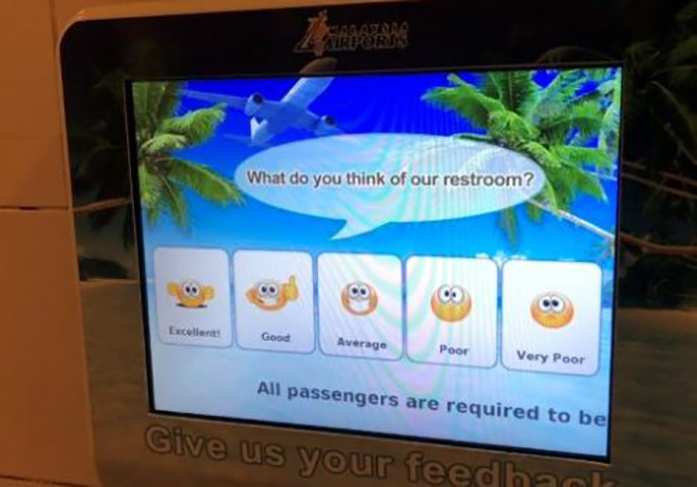 But ground-breaking architectural concepts aside, KLIA knows it’s a passenger’s toilet experience that lives long in their memory and after a week in Singapore we were used to being asked to once again rate ours.

As well as showcasing the country’s unique environment, the airport plays its role in presenting Malaysia as an open, progressive nation. In September this year KLIA launched HIMPUN, a month-long showcase of the best of the country’s fashion, craft and food products.

An airport is often seen as a microcosm of a nation. KLIA has taken this literally by actively bringing the richness of the Malaysian landscape and culture into the airport, at the same time creating a positive and unique experience for travellers arriving in the country.

Profiting from perambulation. The drive to improve transport


Kuala Lumpur is a city that is heavily reliant on the car. Reportedly, only 20% of inhabitants use the city’s public transport network. This was immediately apparent as we joined a congested highway to drive the 50 km from KLIA to our hotel in the downtown area of Kuala Lumpur, nicknamed ‘The Golden Triangle’.

And when we naively tried to venture out of our hotel to explore our surroundings on foot (and find a bar to toast our arrival in country two of our three-country tour) a lack of pavements to separate us from the busy network of surrounding roads forced us into a prompt retreat.

Kuala Lumpur is not a city designed for perambulation. Although that’s changing. To avoid evolving into an urban (pavement-less) dystopia the Malaysian government has been working on major development programmes to make downtown Kuala Lumpur more pedestrian friendly, realising that they need to balance economic and physical growth with a sustainable city that people enjoy living in and visiting.

No doubt with an eye of the success of their neighbours, Singapore, Kuala Lumpur’s Executive Director of Planning, Mahadi Ngah has alluded to future measures to drive public transport usage, including imposing restrictions on vehicle usage. 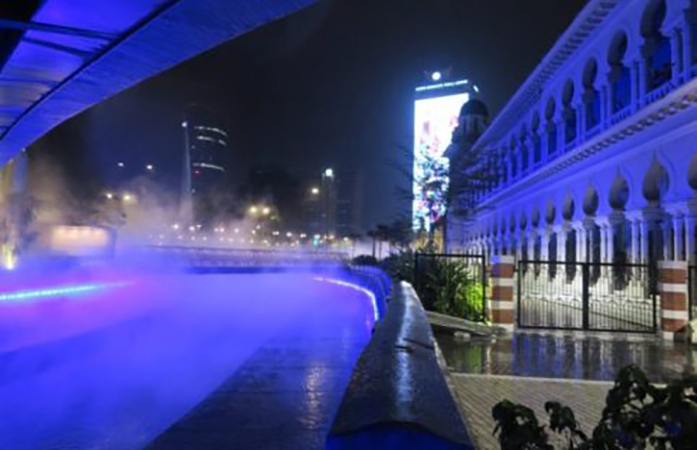 And City Hall has realised that walkability of the city is a key driver of public transport usage. In 2012 the River of Life project was launched, redeveloping Kuala Lumpur’s riverside to create promenades, parks and retail spaces – and seemingly mandatory for every city we visited in South East Asia, a night-time light show spectacular in the heart of the city to delight visitors.

Bringing the outside in. Driving employee empowerment


Our first meeting in Kuala Lumpur was with a Telecommunications company in a business park on the outskirts of the city. A familiar office façade hid a unique environment inside. In the lobby large videos screens hung above an oasis of calming, low level water pools. At the open-air rear of the building a small waterfall trickled down a natural rock face. Echoing Kuala Lumpur Airport’s celebration of the natural environment of Malaysia, in the design of their headquarters this company had consciously brought the outside in.

The video screen in front of us wasn’t advertising the company to visitors but talking directly to its own employees. Senior Directors were being interviewed about internal company initiatives, interspersed with news of money raised at a recent charity day and the results of the latest company fussball tournament.

Or maybe this content was for visitors, showcasing a vibrant and unique company culture, whilst at the same time driving a sense of togetherness and employee empowerment – a recognition of the fact that, despite advancements in technology and AI, it is still front-line employees that ultimately drive the experience a company delivers to its customers.


That evening we visited Jalan Alor, one of Kuala Lumpur’s most famous and vibrant street markets – a seemingly endless row of plastic tables and chairs spilling out from pavement cafes, butting up against colourful fresh food stalls wok-frying noodles and grilling skewered meats. The noise, sights and smells combined to create a rich, multi-sensory experience. 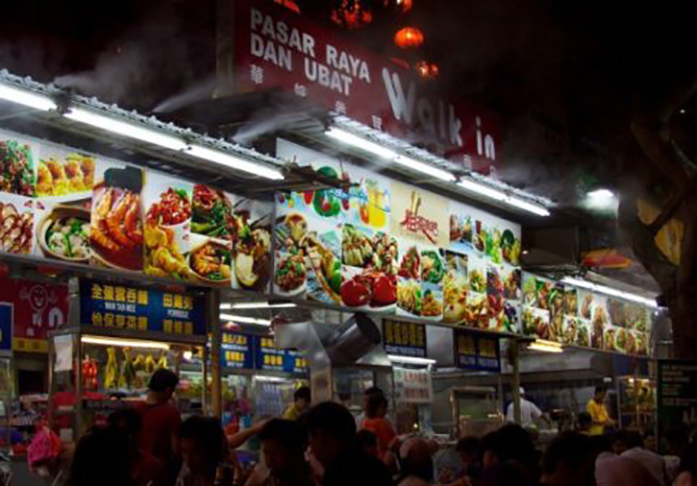 In contrast to Singapore’s largely orderly streets, Jalan Alor is crowded, messy and authentic. As a result, we felt like we were experiencing the ‘real’ Kuala Lumpur and Malaysia’s ethnically diverse culture through its cooking.

By the time we’d fought our way through the dense crowd of locals and tourists to the other end of the street we were desperate to sample this cooking with a cold beer. No wonder both tasted so good.


We had one more culinary experience before we left Kuala Lumpur for Hong Kong. As our hosts sat us down in a local Durian café and handed us some plastic gloves they tittered at our collective bafflement.

A Durian (we learned) is an intensely pungent, bittersweet fruit with an otherworldly appearance. Due to its overpowering smell, it’s been banned on public transport across South East Asia. In Singapore we’d even noticed signs in our hotel stipulating Durians were not allowed on the premises. 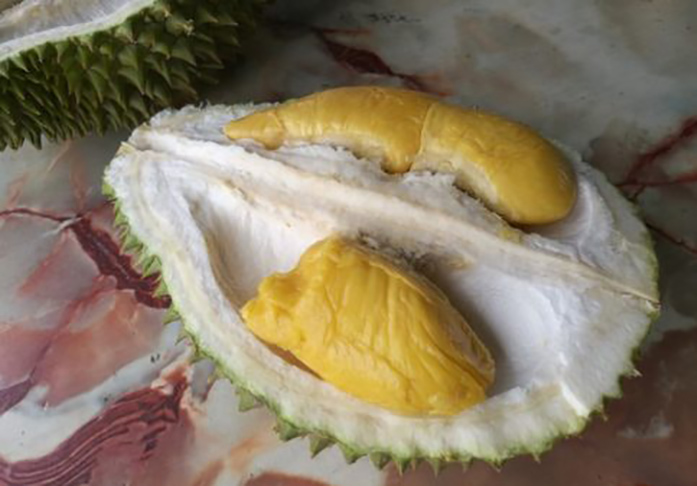 To attract tourists intrigued by its unique taste, Durian cafes in Kuala Lumpur have created a bit of culinary theatre. Asked to pick one of the large, spikey fruits from the display shelf, our server wielded a large knife and chopped it into quarters in the middle of the table before handing us a piece each.

Our consumption of the Durian resulted in facial expressions that were apparently photo worthy. The sweet yet savoury, creamy yet cheesy taste that would stay with us all the way to Hong Kong.

We’d fast run out of time to see Kuala Lumpur’s iconic 88-storey Petronas twin towers. According to Prime Minister, Tun Mahathir Mohamad’s, the landmark was conceived and designed in 1993 to explicitly represent Malaysia’s aspirations to be a ‘global player’ on the world stage – the sentiment of a city keen to attract business and showcase its diversity whilst working hard to improve the living standards of its residents.

When we asked our hosts what the best way to view the towers was we should have anticipated the reply, “We could drive around them?”

Note: This article is written by Eliot Sykes, Head of Customer Experience at Ethology, a sister company of Splash. Eliot and his team were on a 2 week visit of Asia, introducing the Ethology offering to Clients of ours.

Thank you for reaching out!

We take every query seriously. We’ll be sure to respond as quickly

(and with as much thought) as possible.